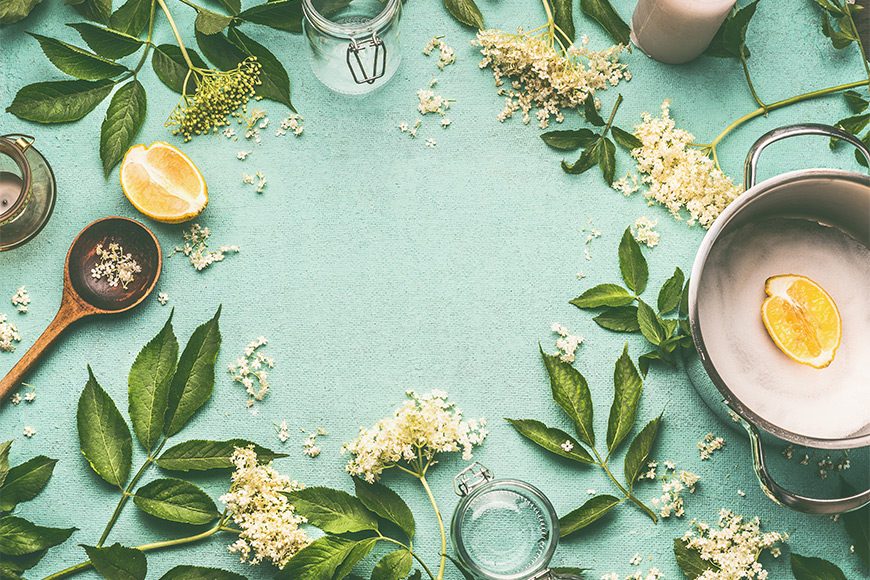 The elder plant, sounds magical right? With a name like that it’s no wonder that this specific plant has some truly amazing benefits. Although, the berries and flowers are considered safe for consumption, it is not recommended to ingest other parts of the plant such as twigs and roots (which are known to have toxic properties).

Being called a “medicine chest”, it is particularly useful for anyone who aspires to make use of herbal medicine in their day-to-day life. It is also a cost-effective alternative to modern medicine, if you are willing to switch over after reading how amazing it is.

We love the elderflower for its ability to ease cold and flu symptoms, and significantly decrease the duration of these symptoms. The Journal of International Medical Research published a study that revealed patients that consumed elderberry extract (within 48 hours of initial flu symptoms) experienced a shorter duration of symptoms, an average decrease of about 4 days.

Elderflower and berries are most acclaimed for their flavouring – which is great – but they have a host of health benefits that go largely unnoticed. The popularity of the flower’s flavouring lead Coca-Cola to create an elderflower inspired drink called Fanta Shokata. The Italian Liqueur, Sambuca, also uses flower’s extract to round out its star anise base flavouring.

Applying elderflower topically to a wound may help reduce pain, swelling, inflammation and stop bleeding. The antioxidants found in elder, and its combination of vitamin A and C, help skin heal, it is great for strengthening tendons and ligaments. It is now creeping into the cosmetic world, with major cosmetic manufacturers like Lush and Doris Wagner Cosmetics using the plant extracts in their products.

If you are someone who suffers from water retention or constipation, elder plant has been observed as both a natural diuretic and natural laxative. Suffering from excess fluid in the body can cause degrees of swelling, which can coincidentally be eased simultaneously through the consumption of the elder plant’s fruit and flowers.

Other notable benefits of elderberry and elderflower include the ability to reduce cholesterol and blood sugar levels (similarly to insulin). It may also contribute to good cardiovascular health and studies have indicated chemopreventive properties, which can deter cancer progression.

Throughout the centuries civilisations have utilised the entire elder plant. Berries have been used in anything from hair dye to drink flavourings. Although, the wood should not be ingested it has been cleverly used to make combs, toys and other trinkets. The elder plant’s flower is commonly used to make teas and syrups. The tea is particularly useful for staying hydrated during the onset of colds and flu. You can make your very own elderflower tea by steeping flowers in water for a brief period, simply strain out the plant and enjoy.

Just a quick interjection, for all our Harry Potter fans out there, the name elder might sound familiar – because it is. The Elder Wand, in Harry Potter and the Deathly Hallows, is actually made from elder wood. See, we told you, magical!

But more to the point, if you have made the usual rounds with flu this year and you’re looking for something to end all your suffering, consider picking up some Phyto-Force Elderflower 50ml. We recommend this tincture for sinus and allergy relief, colds and flu symptoms and as an anti-inflammatory. 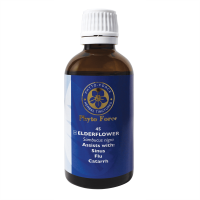 Add to Wishlist
Add to cart

COVID-19: Visit www.sacoronavirus.co.za #Stayhome #Staysafe
We use cookies on our website to give you the most relevant experience by remembering your preferences and repeat visits. By clicking “Accept All”, you consent to the use of ALL the cookies. However, you may visit "Cookie Settings" to provide a controlled consent.
Cookie SettingsAccept All
Manage consent

This website uses cookies to improve your experience while you navigate through the website. Out of these, the cookies that are categorized as necessary are stored on your browser as they are essential for the working of basic functionalities of the website. We also use third-party cookies that help us analyze and understand how you use this website. These cookies will be stored in your browser only with your consent. You also have the option to opt-out of these cookies. But opting out of some of these cookies may affect your browsing experience.
Necessary Always Enabled
Necessary cookies are absolutely essential for the website to function properly. These cookies ensure basic functionalities and security features of the website, anonymously.
Functional
Functional cookies help to perform certain functionalities like sharing the content of the website on social media platforms, collect feedbacks, and other third-party features.
Performance
Performance cookies are used to understand and analyze the key performance indexes of the website which helps in delivering a better user experience for the visitors.
Analytics
Analytical cookies are used to understand how visitors interact with the website. These cookies help provide information on metrics the number of visitors, bounce rate, traffic source, etc.
Advertisement
Advertisement cookies are used to provide visitors with relevant ads and marketing campaigns. These cookies track visitors across websites and collect information to provide customized ads.
Others
Other uncategorized cookies are those that are being analyzed and have not been classified into a category as yet.
SAVE & ACCEPT